European status of the common hamster has been extensively studied and discussed recently, however, in Hungary there were no up-to-date information regarding the density and distribution of hamsters. In most part of Europe the common hamster is retreating while in Hungary the high density populations still exist but the situation is ambivalent: it is a protected species although locally it is able to cause significant damages. Where the hamster is common, especially in urban areas, people try to eradicate it as unfortunately it is allowed in East Hungary until 31st of May by an article of law.

The Fishing, Hunting and Arms International Exhibition was organised the 23rd time this year. The event was held  in Budapest between 18-21. February 2016, and BirdLife Hungary (MME) took part in it as an exhibitor.  270 exhibitors of 12 countries took part in creating the biggest FeHoVa exhibition ever. It’s huge success can be measured by the over 62 thousand visitors.

The AGROmashEXPO was a great success this year, it has brought together over 45.000 visitors from far and wide! The agricultural trade exhibition was organised in Budapest, on the 27-30th January 2016., and BirdLife Hungary (MME) took part in it as an exhibitor, representing the RAPTORSPREYLIFE LIFE+ project amongst many other. 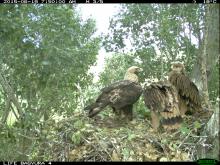 In July 2015, in the frame of the LIFE project, colleagues of Fertő-Hanság National Park Directorate successfully installed a camera at an Imperial Eagle (Aquila heliaca) nest located in the national park. The photos taken by the camera revealed that the device did not disturb the adult birds, they spent long time in the nest. The photos also showed that the adult female spent the night in the nest, sleeping 10-30 minutes in the “classical” position, with the head laid on its back.

In the past few days juvenile saker falcons started to fledge, however ringing is still ongoing at the late brood.

This year, ringers found a brood of sakers with 6 chicks, which was an unusual and very rare phenomenon as sakers used to have five chicks at maximum. The chicks - five males and one female - were in good condition.

Almost 20 years ago, another nest with six eggs was found, but that breeding failed in the end. 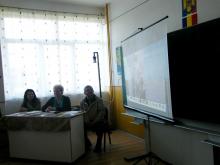