European status of the common hamster has been extensively studied and discussed recently, however, in Hungary there were no up-to-date information regarding the density and distribution of hamsters. In most part of Europe the common hamster is retreating while in Hungary the high density populations still exist but the situation is ambivalent: it is a protected species although locally it is able to cause significant damages. Where the hamster is common, especially in urban areas, people try to eradicate it as unfortunately it is allowed in East Hungary until 31st of May by an article of law.

In 2014 started the EU founded RAPTORSPREYLIFE project, aiming  to secure the prey source for the endangered Imperial eagle (Aquila heliaca) and Saker (Falco cherrug) in Hungary and North-west Romania. An extensive survey regarding hamster was carried out within the framework of the project, which proved that high density populations can be found at several places of the Great Hungarian Plain even though it disappeared from many former locations. It was also revealed that the rage of hamsters has changed dynamically and drastically during the last decades, it emerged and increased in formerly “hamster-free” places or the opposite, it could also suddenly disappear from former habitats. Furthermore, several hot spots were detected where the population density was extremely high. These sites have particular importance in the management and protection of common hamster. 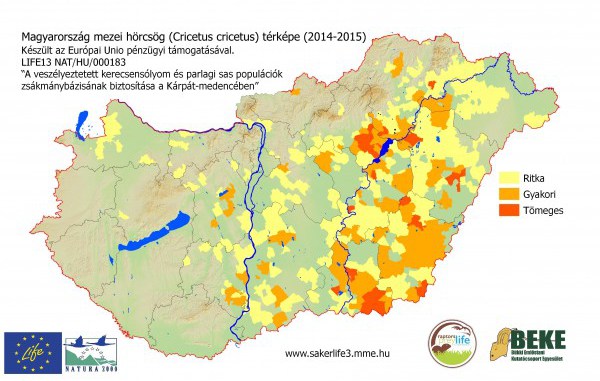 In the Great Hungarian Plain, the hamster colonized several villages, raising new and specific problems. Local people are trying to break off the explosions of the populations even out of the period authorized by the national law of nature conservation. Besides, the hamsters, such as other wild rodents, are potential vectors of many pathogens and parasites, which could be dangerous directly for domestic animals and indirectly for people. An additional problem is that urban hamsters are unavailable for strictly protected predators (e.g. Imperial eagle and Steppe polecat (Mustela eversmanii)) so they are not able to reduce the number of these hamster populations, while on the other hand predators also lose another important food source after ground squirrel (Spermophylus citellus). Therefore, the issues raised by the problems related to urban hamster must be addressed. An action plan had been prepared within the RAPTORSPREYLIFE project for the management of the mentioned problems that includes the translocation of urban hamsters to Natura2000 areas. In Hungary, hamster translocation has not yet been implemented, so the translocations taking place in April and May 2016 will be the first ones. Beyond the pilot urban hamster translocation action, other activities are also being implemented, such as a parallel hamster monitoring (field hamster survey in parallel with prey composition analysis of breeding eagles) that is being performed together with the HELICON LIFE project of BirdLife Hungary, as well as parasitology and virology tests and analysis in cooperation with NHMUS Parasitological Collection and HAS Inst. for Veterinary Medical Research. 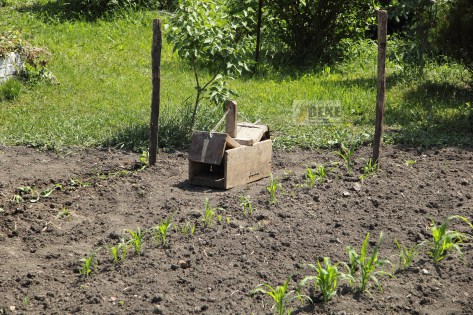 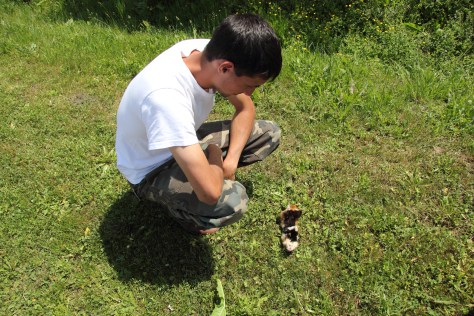 The hamster found dead in the garden is being left for a cat (Photo: Tamás Cserkész).