The translocation of urban common hamster colonies has begun

Establishing new hamster population was not among the initial plans of the RAPTORSPREYLIFE project due to the lack of basic and up-to-date knowledge regarding the actual status of the hamster in Hungary. The experts were neither unaware of that many settlements in East Hungary were colonized by the hamster after 2010. 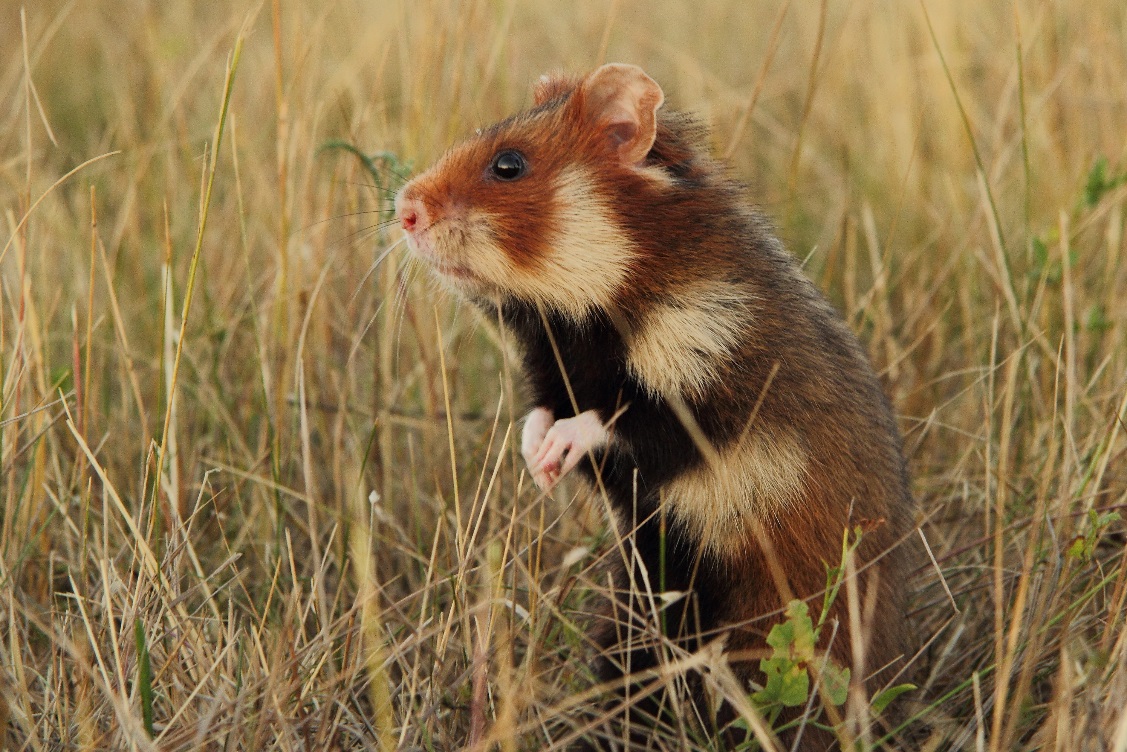 The common hamster is a protected species in Hungary, as well as in the EU.

The phenomenon is not new, since from previous data the appearance of hamster populations at urban areas was already known, but according to the elder, local people there have never been such a high number of hamsters in the villages before. Although the owners of the small gardens are constantly using control measures, including intensive trapping and poisoning, killing even more than 100 animals in some gardens every year, the density of the hamster population still does not decrease. Today, we already know that parallel to this the hamster is becoming less and less common outside the settlements, moreover, there are large areas where already hardly any hamster can be found . According to the latest analysis of BirdLife Hungary (MME) it is hard to find hamster in the food of the imperial eagle (A. heliaca); however, hamsters constituted the main part of eagle’s food in certain regions of Hungary some decades ago. Not only the Hungarian hamster population is declining but also the Western European ones show significant drop during the past decades, and probably this  is also happening now in the Eastern European and Asian range of the hamster. 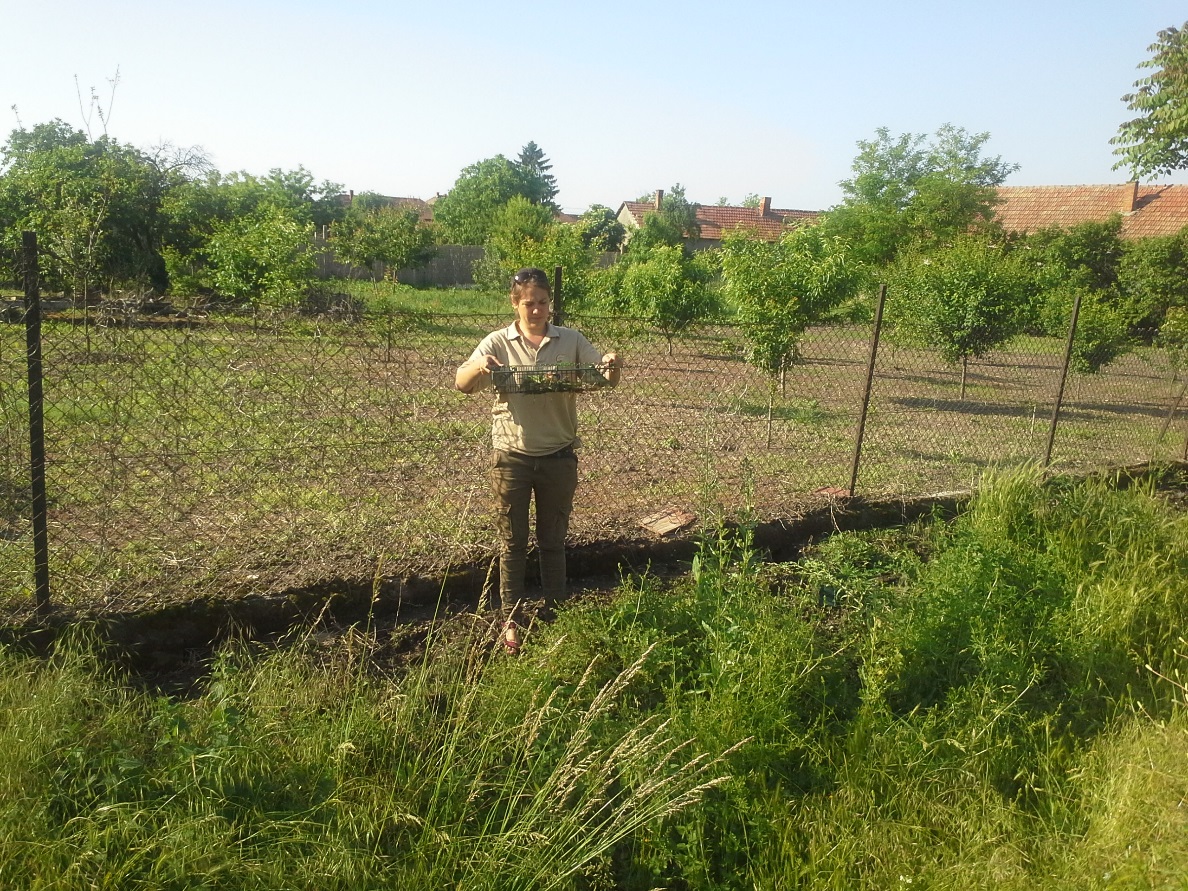 Hamsters can be found everywhere in less disturbed places from where they go out to make a raid upon the small gardens .

Therefore, the problem of the urban hamsters is multifaceted. Individuals of a protected species can cause – even if just locally – considerable property damage, and potential epidemiological risk. On the other hand, people of the villages are killing the individuals of a protected species, while at the same time their protection is highly supported and financed by some Western European country, and by the EU  (http://www.grand-hamster-alsace.eu/the-life-alister-project/?lang=en). In some regions of Hungary, the hamster hotspots have shifted to the settlements from the ploughlands which is also unfavorable for the ongoing raptor protection efforts, since the urban hamsters are unavailable for the eagles or for the steppe polecats (Mustela eversmanii) (however, in one case even a Golden Jackal (Canis aureus) family moved in a village due to the presence of the urban hamster colony though at the end they were shot). 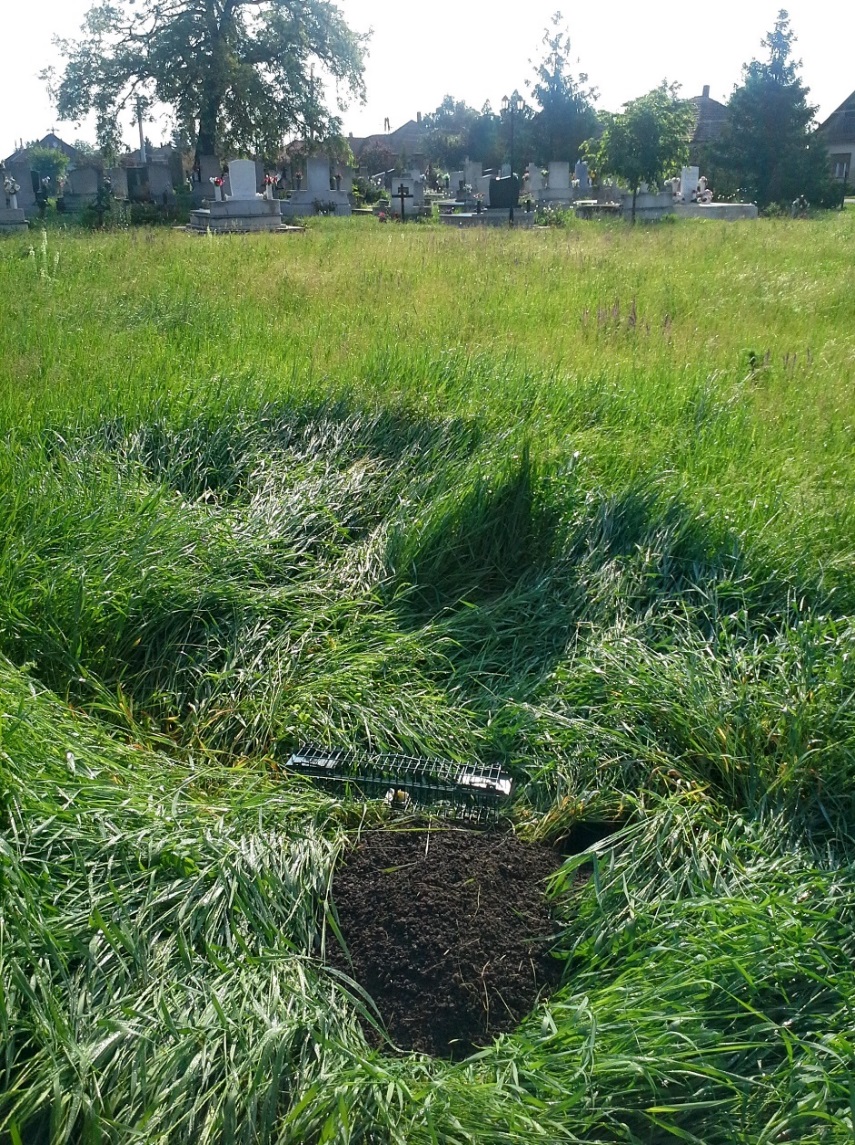 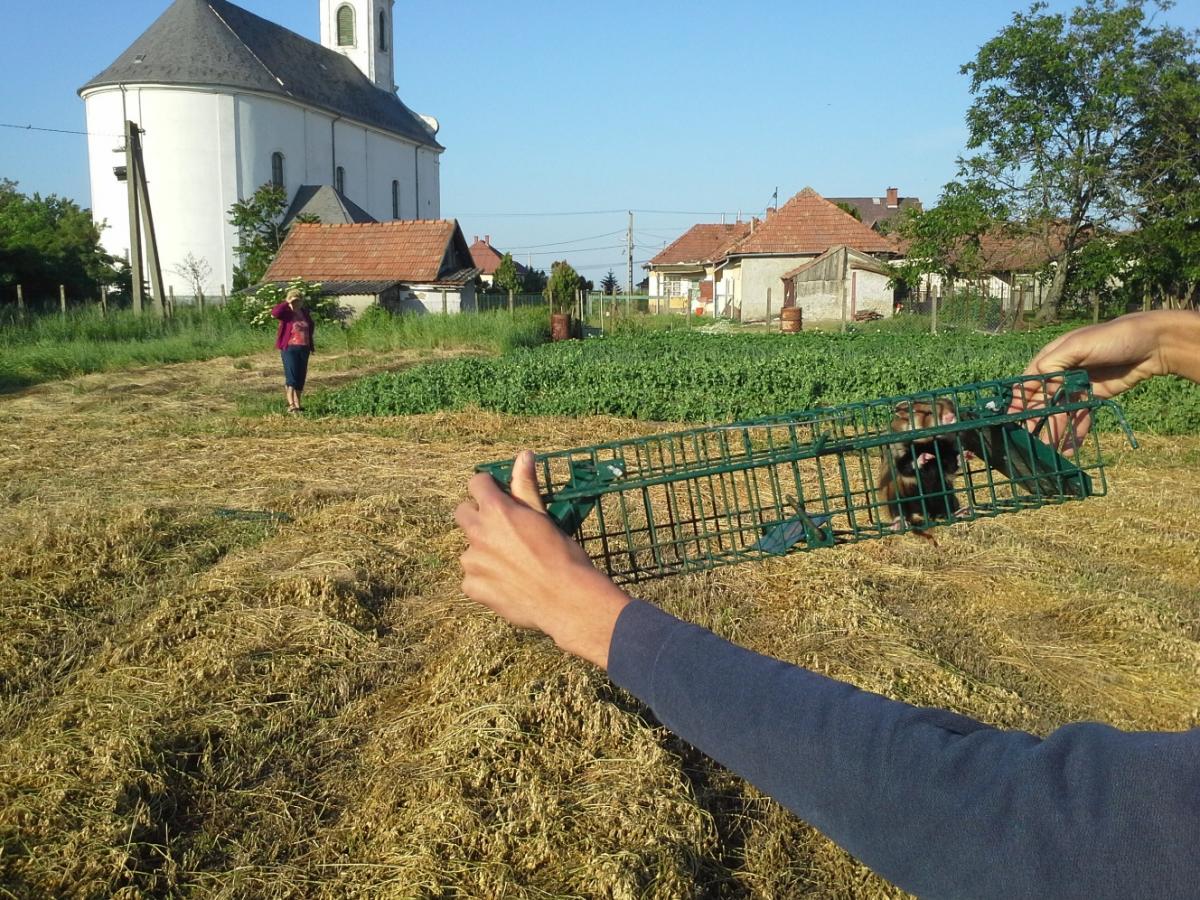 Owners can breathe a sigh of relief for a while.

In the light of these fact, staff of the RAPTORPREYLIFE project is developing a management plan focusing on the formation of new hamster population based on the translocation of those urban hamsters. Therefore, the aim of this action is to establish new hamster colonies where their size will be controlled by the natural predators, and to ease the villages from the damages caused by hamsters. Consequently, this action is not only favorable to the protected rodent and its strictly protected predators, but also to the inhabitants of the villages. 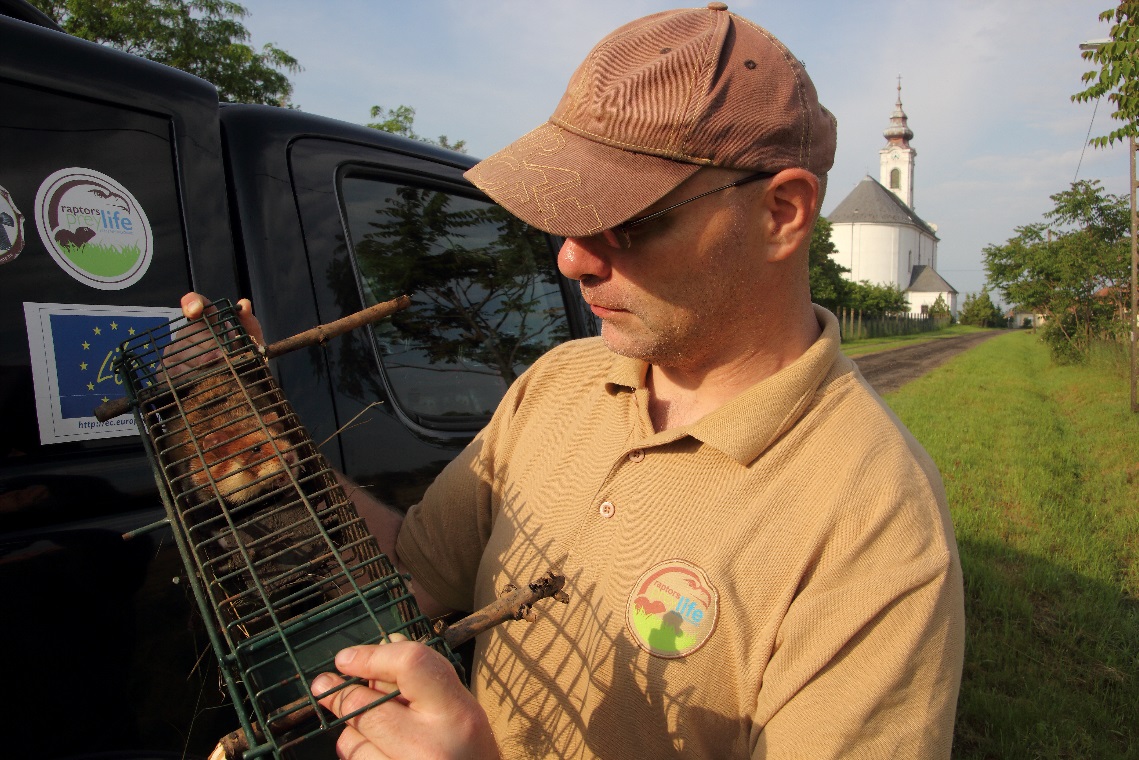 Hamsters can be easily caught, and transported in the average ground squirrel trap.

In May close to the city of Jászberény, as a first step of the action, a site for the hamsters was prepared by drilling artificial borrows and erecting fences. This site is managed by the Hortobágy National Park Directorate, the number of red foxes (Vulpes vulpes) is very low, so the long term protection seems to be guaranteed, and moreover, the hamster reintroduction fits well to the complex conservation program of the area. In May, the animals were captured in the town of Szihalom (Heves county). Local people and also the local government helped to find the most “infected” neighborhoods, streets and gardens.  The number of the active burrows exceeds the 70 burrows/hectare in these sites, indicating that 30-35 hamsters per hectare may live in the hotspots. During the last action in May, 50 hamsters were captured in privately owned gardens and public areas within Szihalom, and were released in the prepared site near Jászberény.

Video showing the translocation of a hamster: 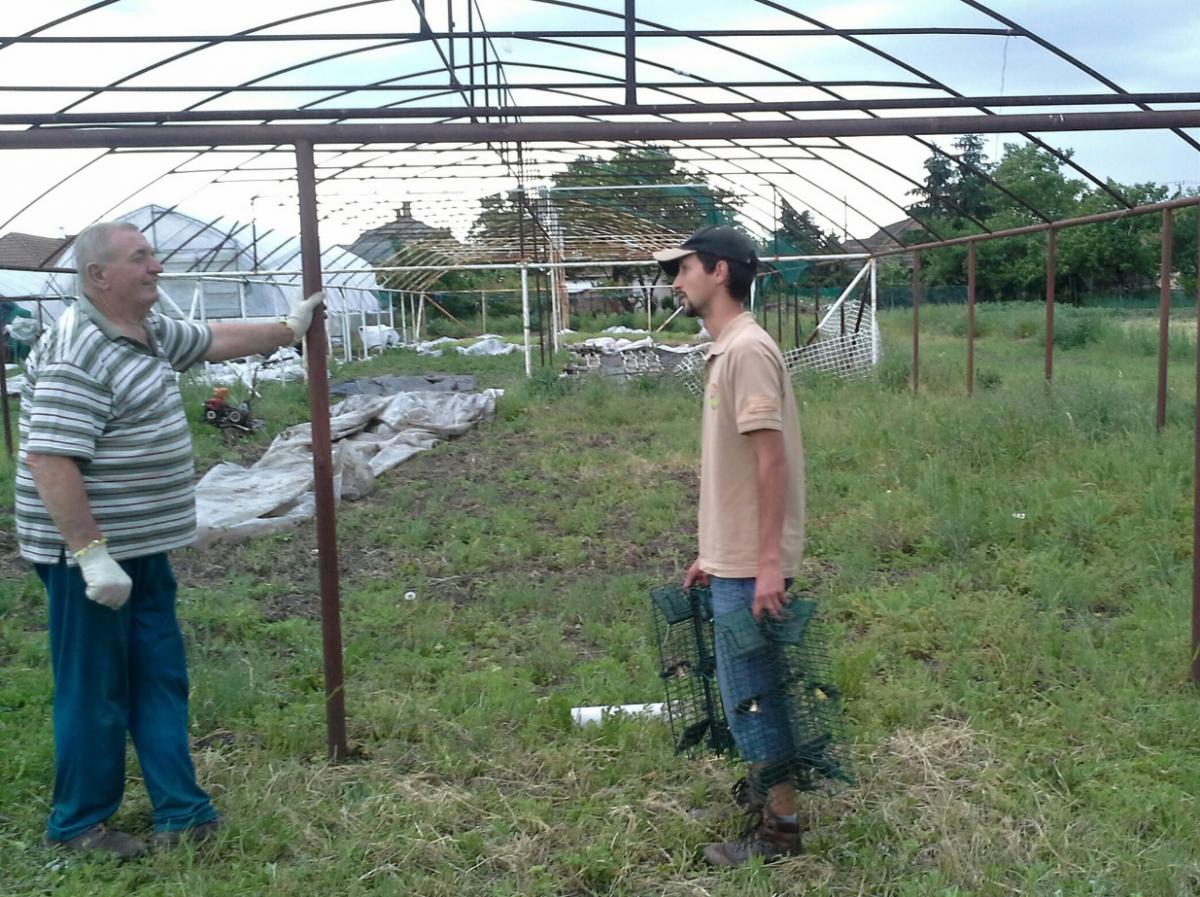 The action provided many opportunities to interact with the public, and to provide them with information. We've listened to the needs of the locals, but also informed them about the importance of the protection of the species. 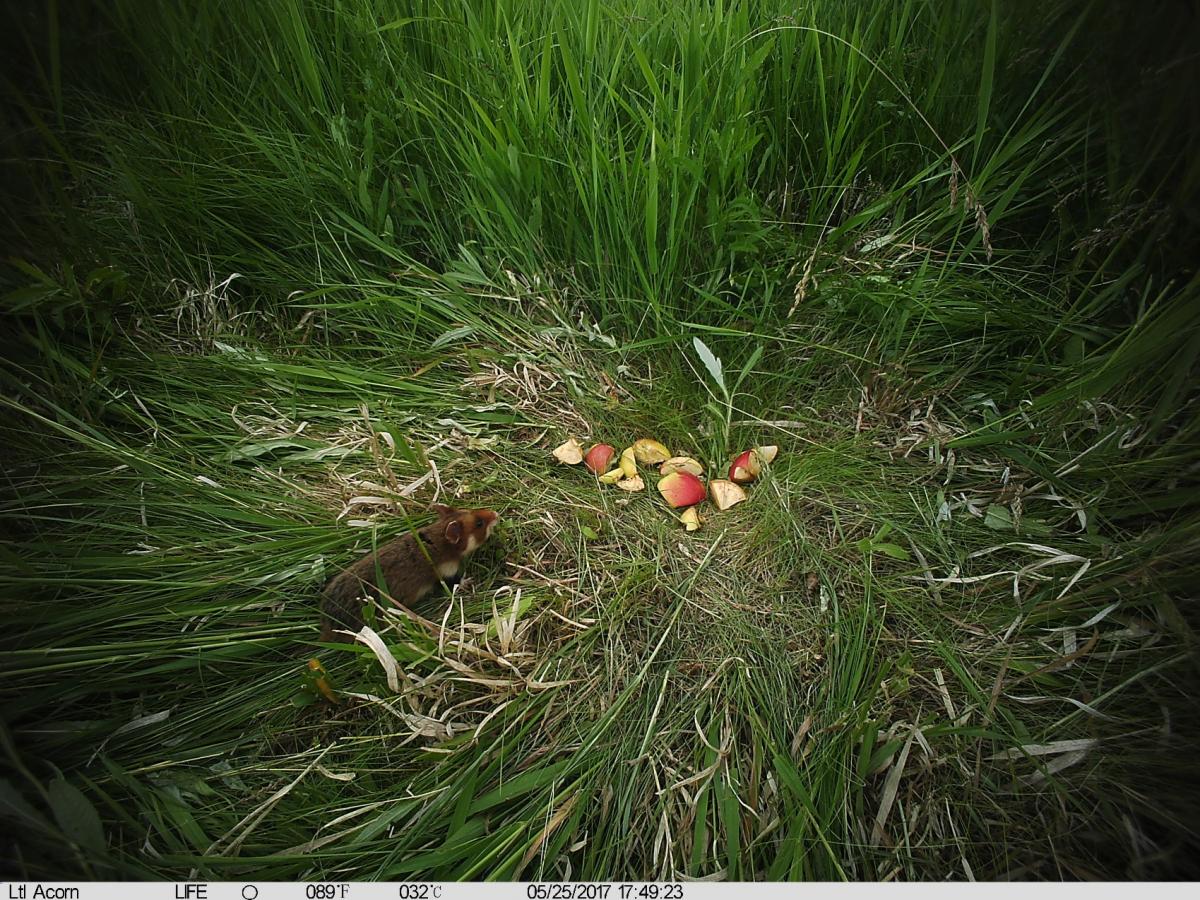 Post-release monitoring was started by setting up trail cameras in front of feeders. 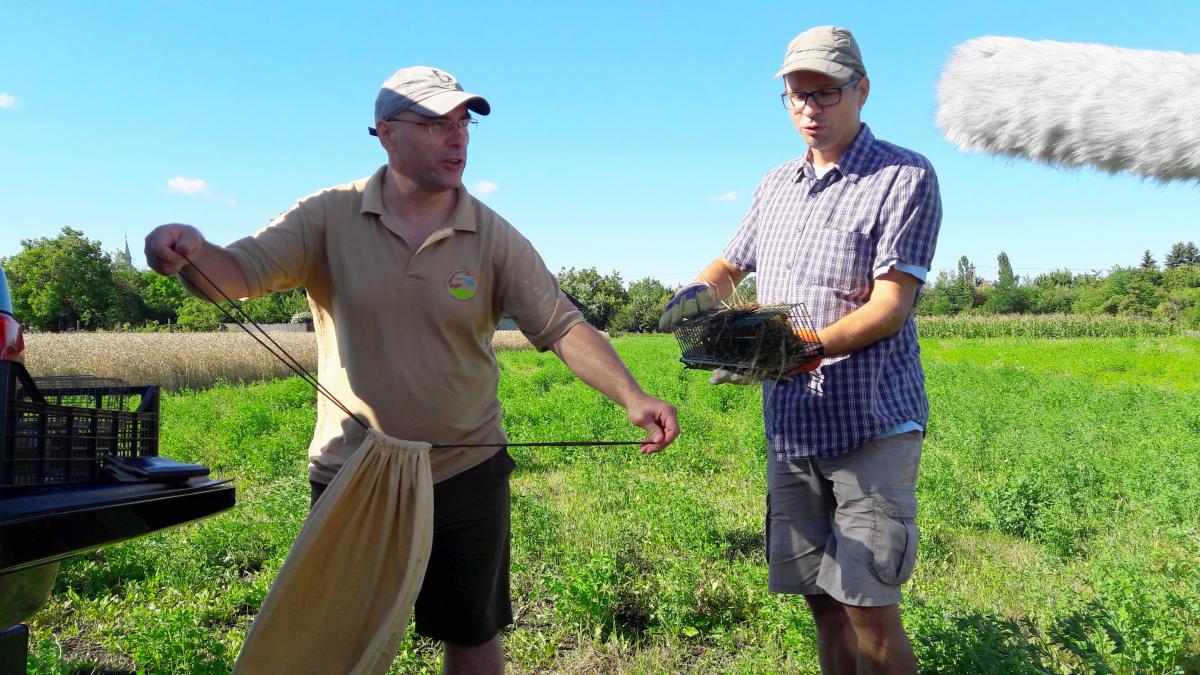 Capturing hamsters in urban areas, and releasing them in rural habitats attracted some media attention. 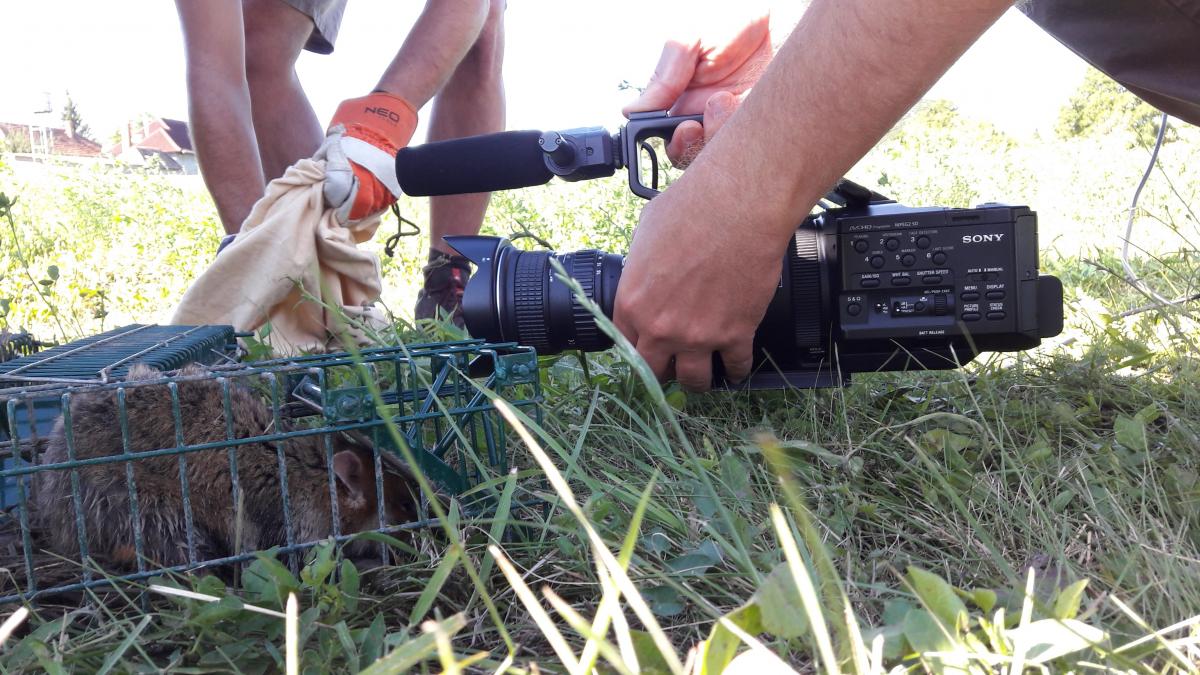 Szihalom is not the only settlement invaded by hamsters; the hamster is also common in the surrounding villages such as Szentistván, Mezőszemere, Átány, etc., so there is a huge demand for the continuation of the program. For this reason we are planning to establish some further viable hamster colonies in other parts of the country using the urban populations as a source. In parallel with the translocations, a research program examining the pathogens (parasites and viruses) of the hamsters had been launched in cooperation with the Institute for Veterinary Medical Research.